Links to the old web pages of KKE

The international sites of KKE gradually move to a new page format. You can find the previous versions of the already upgraded pages (with all their content) following these links:

A message of resistance against high prices, the imperialist war, and the Greek involvement was sent by thousands of people who demonstrated on Sunday 1 May 2022 in Syntagma Square outside the Greek Parliament in Athens as well as in 70 cities  around Greece.

The mass strike rallies in all the cities of the country honoured the dead of the working class, the heroic workers’–people’s struggles, the hard-won workers’ achievements in the unrelenting struggle with our exploiters. 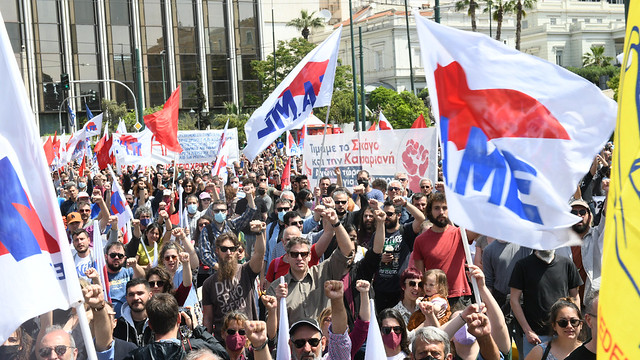 As mentioned in the Statement of the Central Committee of the KKE on this year’s May Day, “Workers’ May Day highlights the path of class struggle, the only ‘right side of history’ for the people since it is the one that moves the wheel of history forward. Apart from being a day of commemoration and honour to the working class, the creator of social wealth and  architect of social development, May Day is a day of struggle and new objectives that —especially in today's conditions of wars, crisis, poverty, and exploitation— illuminates the path to the new society, the socialist-communist one”.

The KKE called upon the people so that “this May Day can become the starting point of militant escalation.

‣ For salary increases, a minimum salary of at least €825, sectoral and enterprise-level labour contracts with increases greater than inflation rates.

‣ For the abolition of anti-labour laws and the annulment of the anti-labour arsenal that criminalizes trade union action and the right to strike.

(...) The KKE addresses a special call to strengthen the workers’ and people’s struggle against imperialist wars and the involvement of Greece in them, in any way or under any pretext. The people must not choose a camp between thieves. All US-NATO bases must close. Greece must stop being a launching pad for war serving the murderous plans of NATO and the EU. The solidarity among the peoples and the struggle against every domestic and foreign ‘tyrant’ must be strengthened. The Joint Statement of 42 Communist Parties and 30 Communist Youth Organizations reinforces this orientation. (...)

Today, the way out can be found in the path of organized struggle for the regroupment of the movement, for the rights of the working people, in joining forces with the KKE.

This is the path that brings to the fore the contemporary potential for the workers to live with dignity, enjoying the enormous wealth produced and the leaps in science and technology. This is the path so that we do not bleed again for the profits of the few, until the final abolition of the exploitation of man by man.

The current system can only be overthrown and replaced by a more advanced social system, that is, socialism–communism, where social ownership over the means of production, scientific central planning for the meeting of popular needs, workers’ control and participation in all institutions of power can lead to the prosperity of the people, to peace and progress of humanity.”

Dimitris Koutsoumbas, General Secretary of the CC of the KKE, attended the strike rally at Syntagma in Athens and made the following statement to the media:

“The only right side of history is the path of the class struggle, which moves the wheel of history forward until the complete emancipation of the working class, with the abolition of the exploitation of man by man.”

On the side of the workers in the port of Piraeus

After the May Day strike rallies in Athens and Piraeus, thousands of protesters headed to the port of Piraeus expressing their solidarity with the COSCO strikers so that they continue their just struggle for a satisfactory Collective Labour Agreement and the implementation of life protection measures. 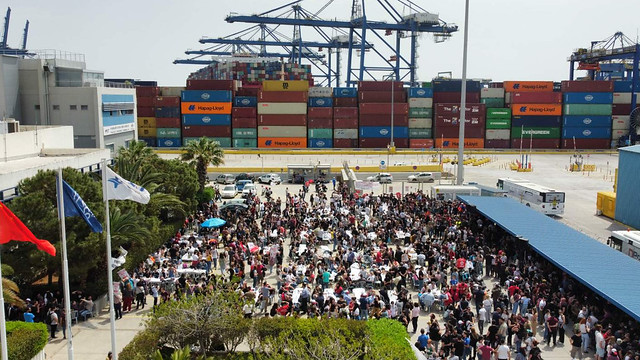